Competitive Bodybuilding: What are the Poses & How is It Judged?

In male competitive bodybuilding athletes are judged on their relative strengths and weakness compared to their peers. There are different divisions (teen, jnr, open, master etc), but the competition takes place over three Rounds

Round 1, Symmetry; The muscle size and proportions of the body are judged using the 4 symmetry poses, or quarter turns – front relaxed, side pose to the right and left and rear relaxed

Round 3, Free Posing and Posedown; the athlete’s physique is judged as they perform a routine to music. Routines usually last between 30 to 90s. This round allows athletes to display their strengths, hide weakness and is often considered the tie breaking round. Of note some bodybuilding competitions don’t always score this round separately.

*As an adjunct, athletes are also judged on their presentation, which includes their ability to display their physique affectively as well as their skin tone, stage tan and presence. 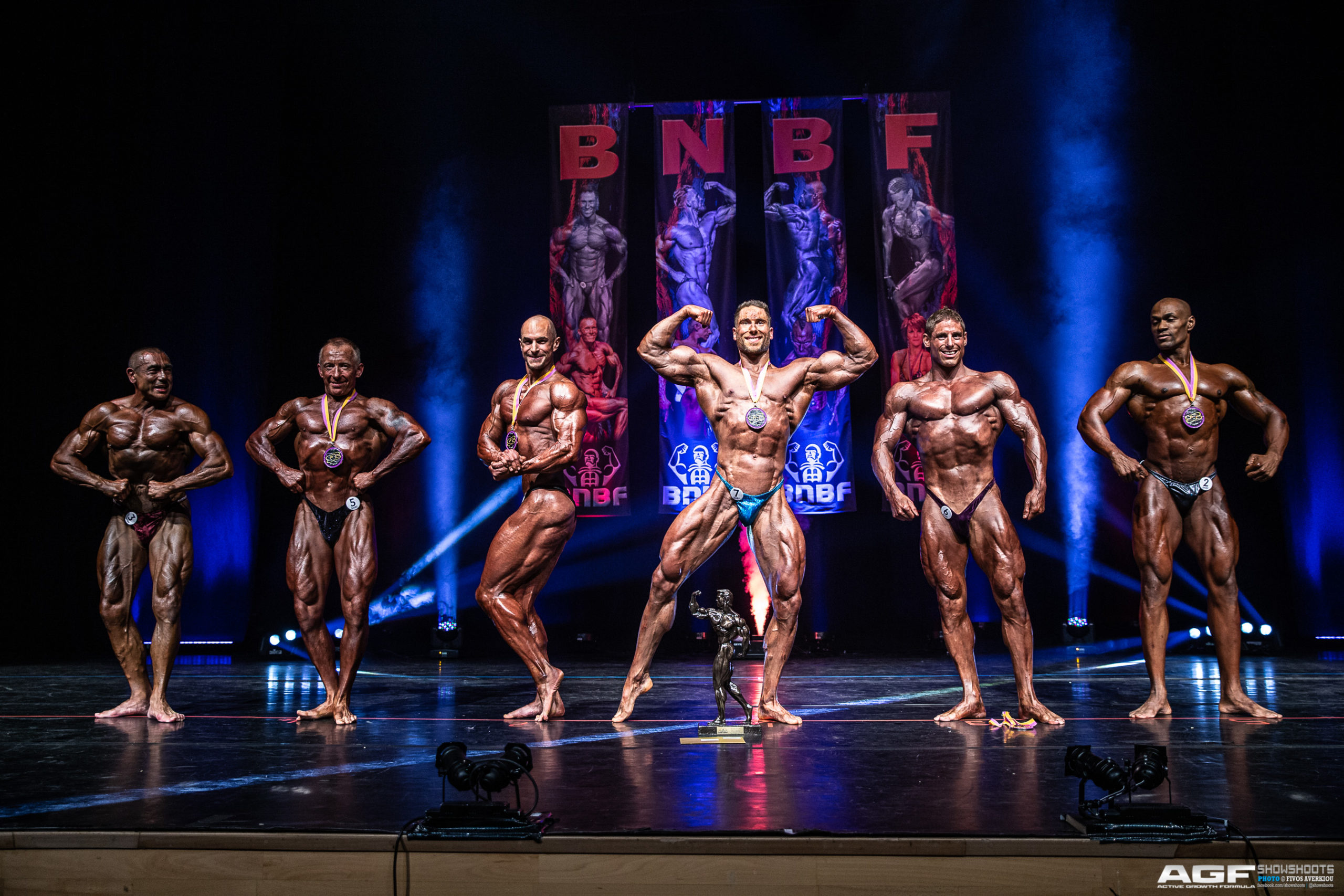 The sport is subjectively in the same way that sports like high diving, ice skating or gymnastics is but just like the aforementioned sports, the judges are working from a criteria. An athlete receives a score from 1 to 7 (or sometimes higher depending on how many competitors are in the class), for each of the rounds, and the athlete with the lowest score over all is the winner.

It is possible to score higher and lower in different rounds, and because there are multiple judges it’s also possible to score higher or lower with different judges. The head judge will tally up the scores from all the judges on the panel, usually the highest score and the lowest score for each athlete is removed to remove bias and standardize. Where there’s a tie on the overall score card, the head judge may have the final decision on who the winner might be, or the athlete with the highest number of higher places is usually given the nod. An example of a bodybuilding score card might look something like this:

The Symmetry Poses: Round 1

The 4 poses in the symmetry round are as follows:

Pose 1. Front Relaxed facing the audience, showing the front of the body 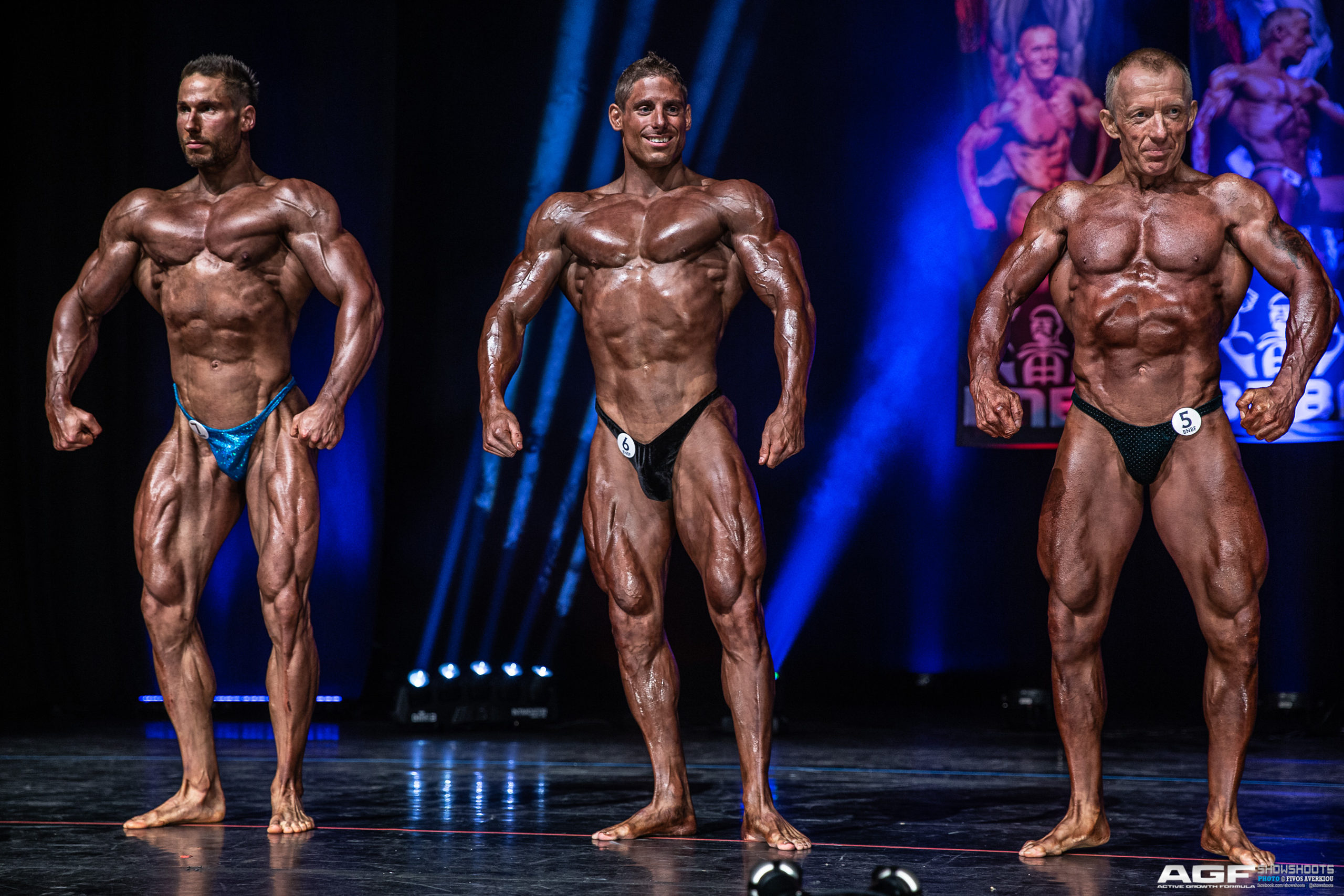 Pose 2. Quarter turn to the right, showing the left-hand side of the body 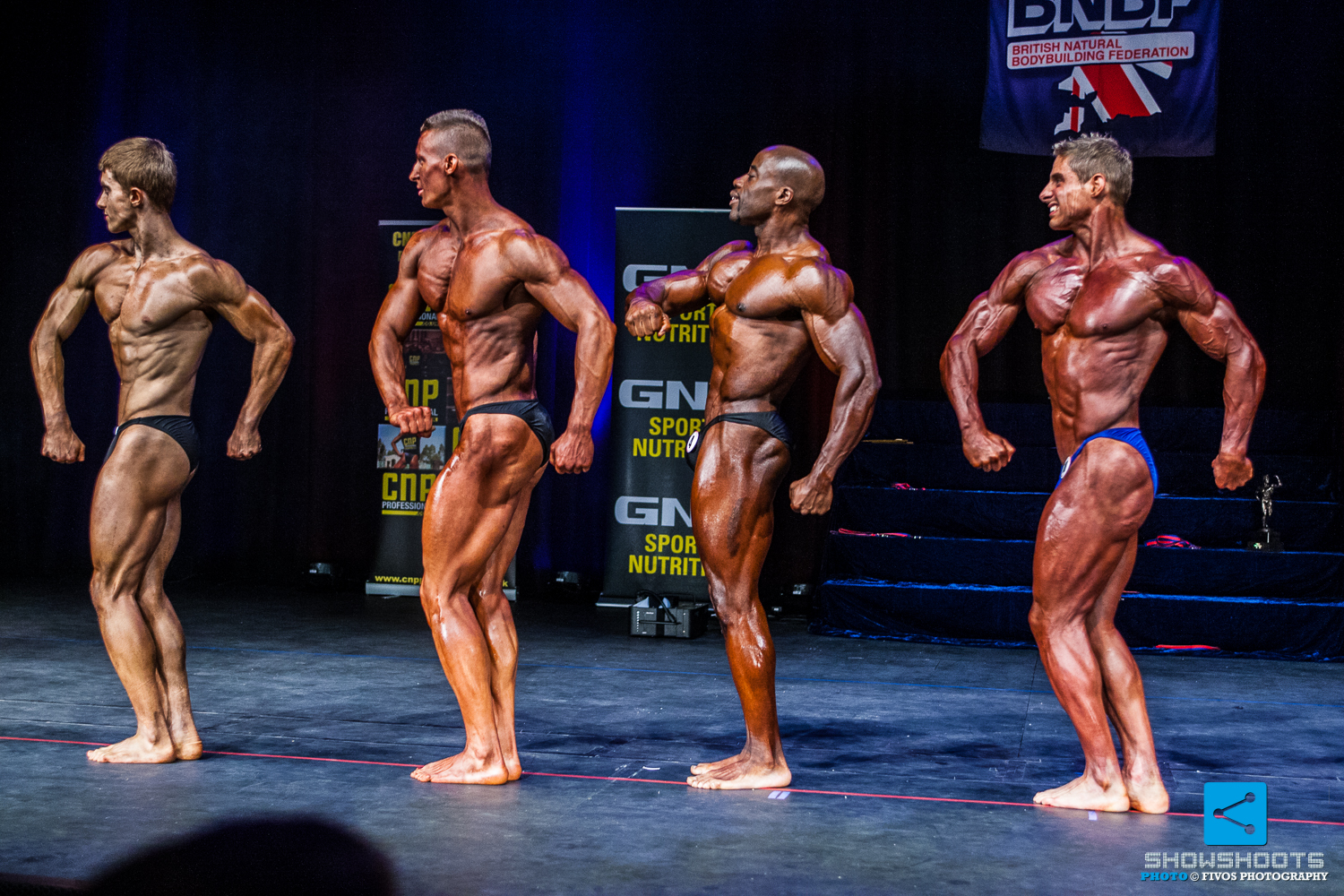 Pose 3. Quarter turn to face the rear of the stage, showing the back of the body 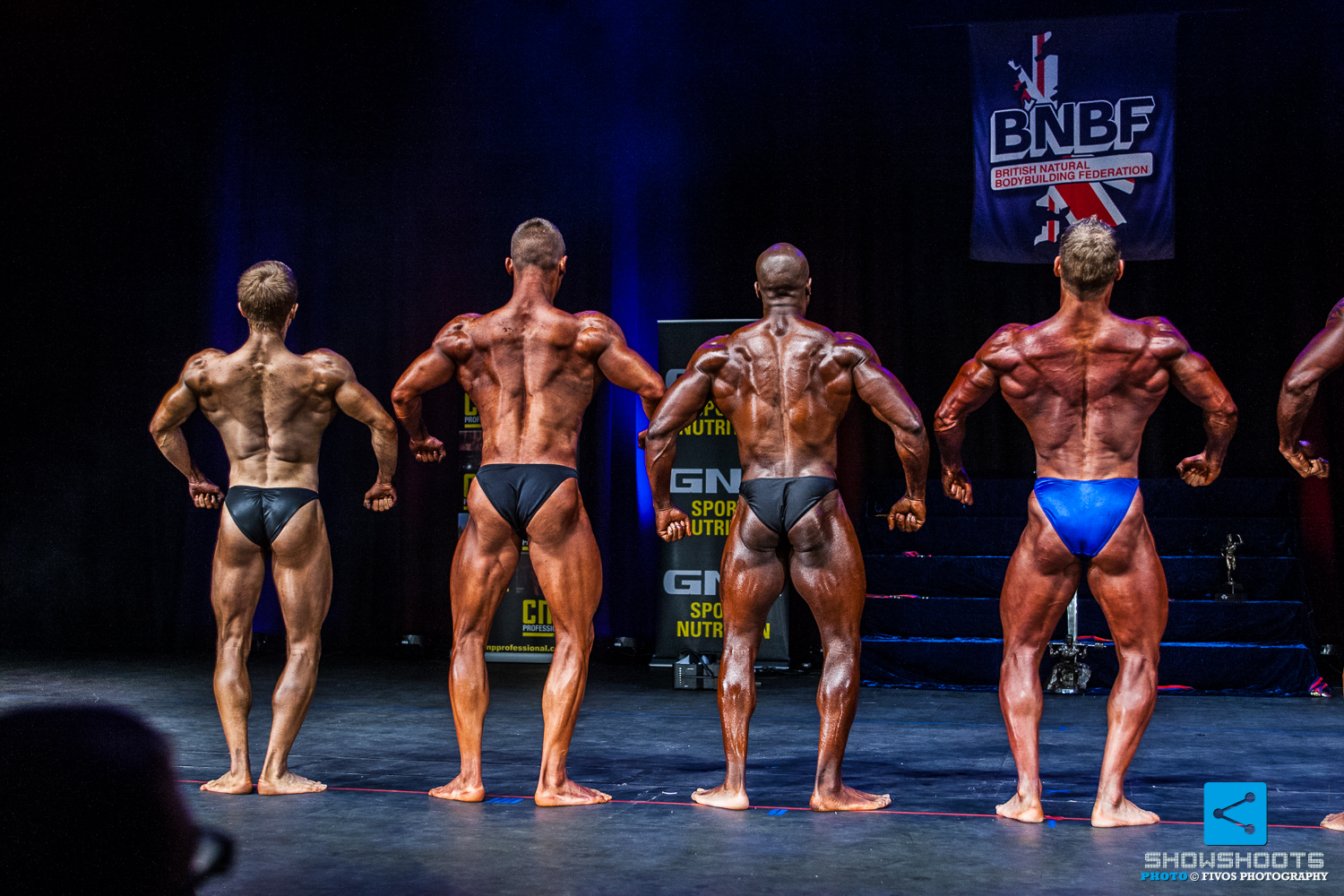 Pose 4. Quarter turn to the right showing the right-hand side of the body 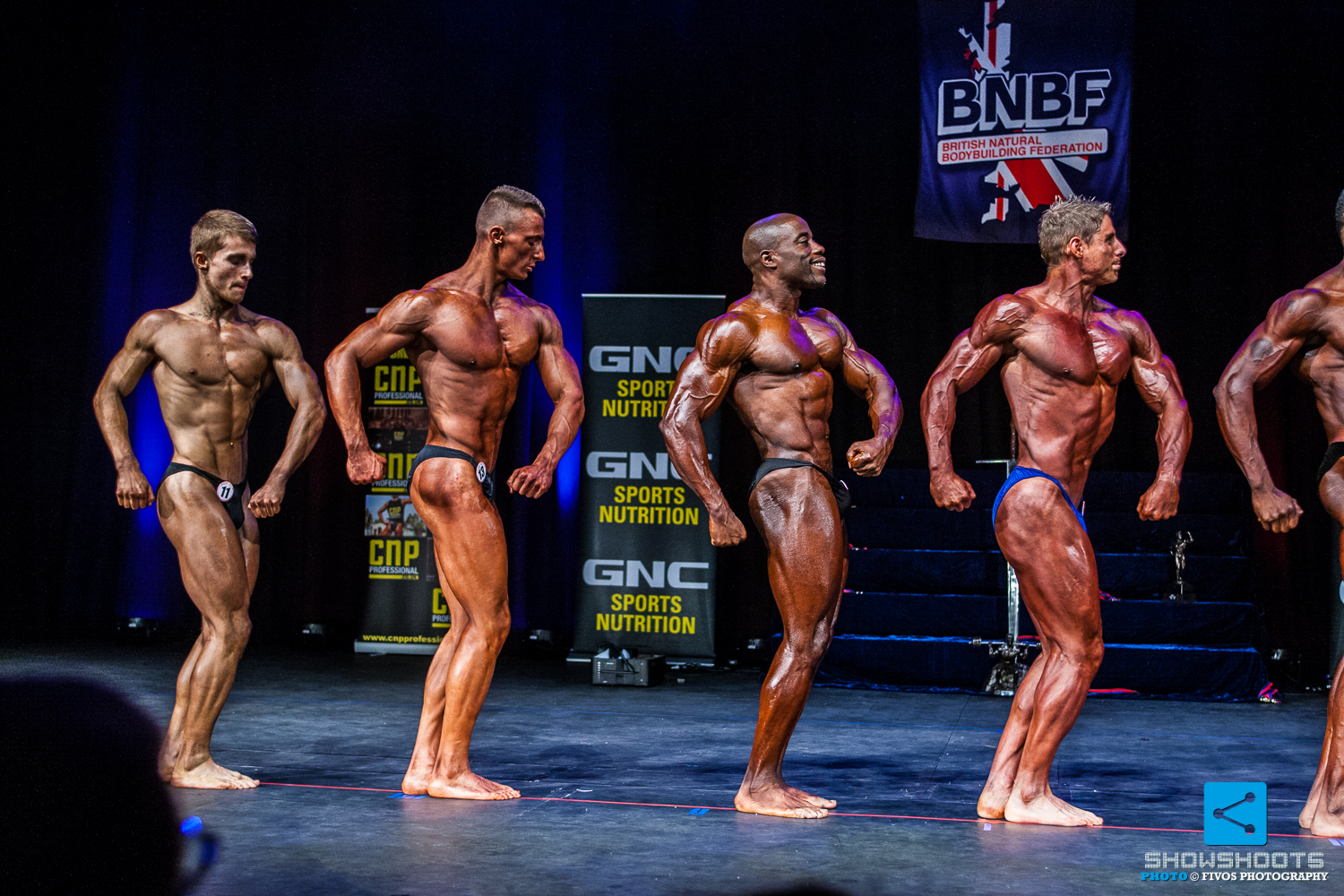 The 8 Mandatory Poses (Muscularity): Round 2

There are 8 mandatory poses each contestant must show in a bodybuilding competition. Some competitions only use 7 (excluding the most muscular), there are of course other poses, but these are the ones you must do. The sequence might also differ slightly between competitions, but this is generally the order you can expect to see them in. 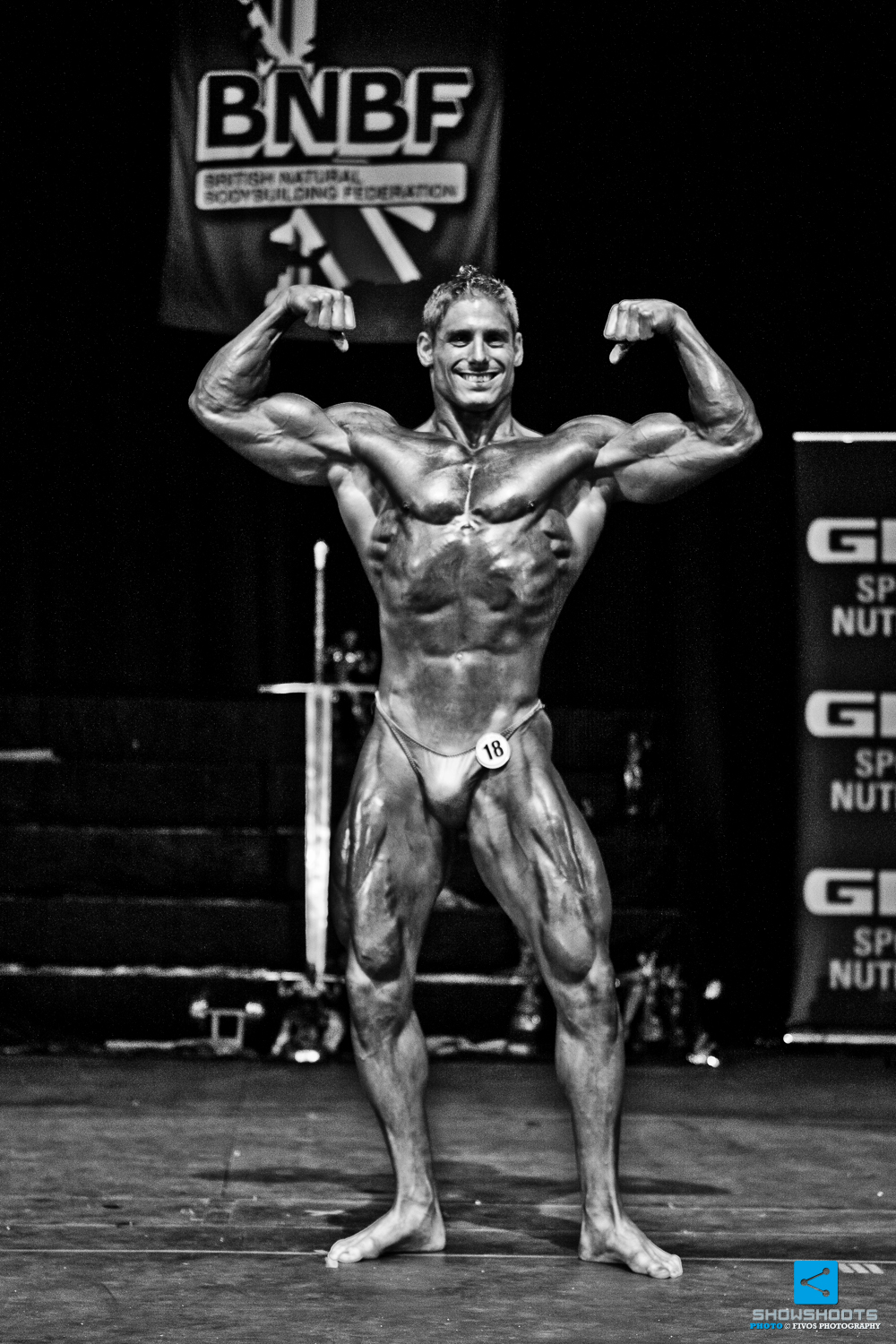 The front double biceps along with the most muscular is probably the most well-known bodybuilding pose. The shot is a showstopper, there’s no hiding with this one and any weakness a competitor might have from the front are exposed. The pose shows off your arms, the front lat width to create the V taper, quadriceps size and definition, and front calf musculature. If you lack lat size, or have a thick midsection, or undersized legs, this pose like the others where the arms are above the head can really hurt a competitor’s chances. 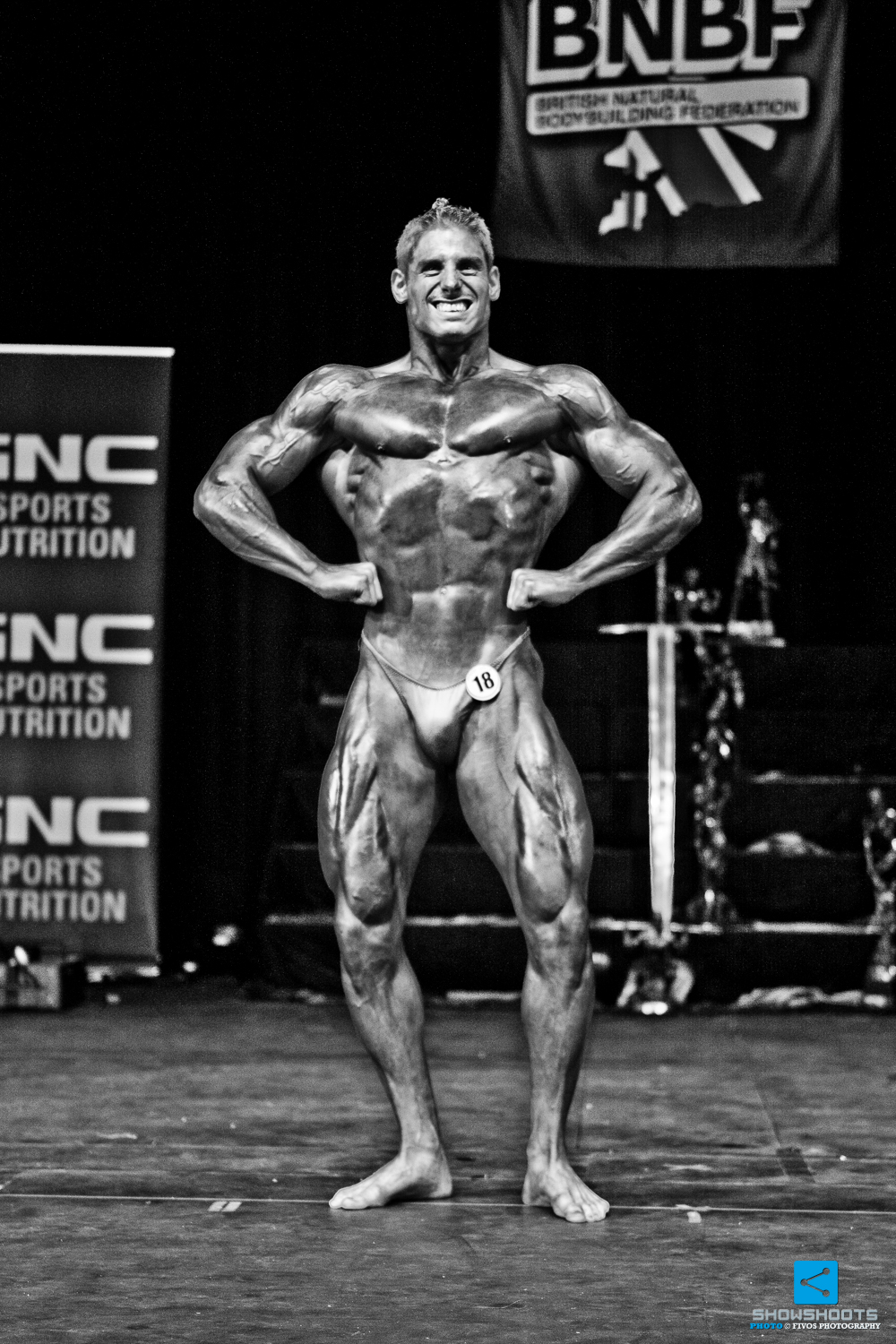 The lat spread is all about the V taper and displaying your lat width from the front, chest thickness, shoulder width, front arm and forearm size, quadriceps mass and separation, and calf development. Mastering a good front lat spread takes time, but once you’ve got it you can create an imposing shape that dwarfs your peers. 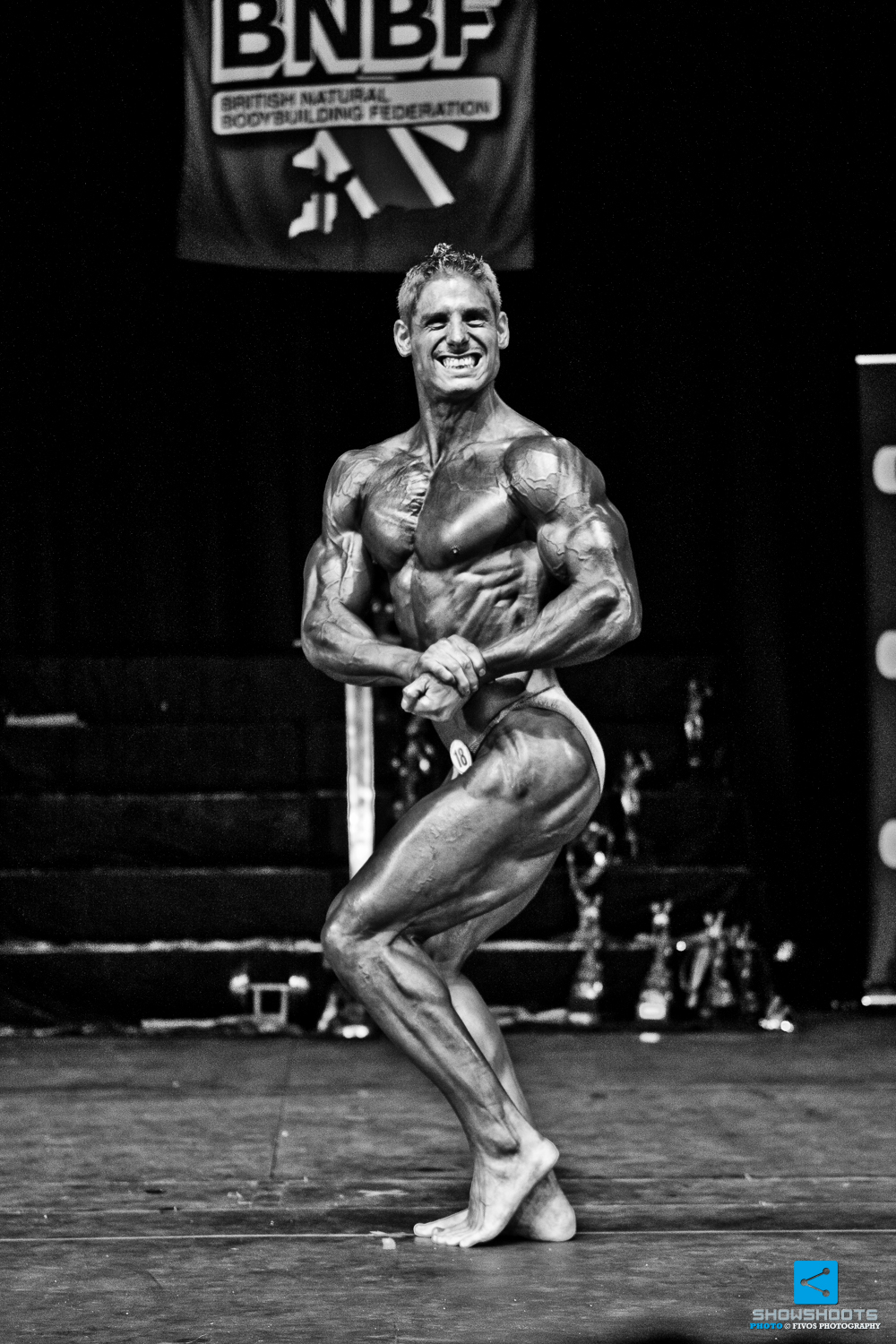 The side chest is a classic bodybuilding pose, legend has it Arnold Schwarzenegger could balance a pint of milk on his upper pecs while performing the side chest. This pose isn’t just about the chest though and should be thought of as a side of the body pose. Consider the calves, hamstrings, quads, glutes, midsection arms and chest in this shot.  Be sure to show your strongest side, top to bottom or the side that your most comfortable with. If you have tattoos that might mean choosing the side of the body without them. When you hit this shot remember to rotate your hips to make your waist look as small as possible. 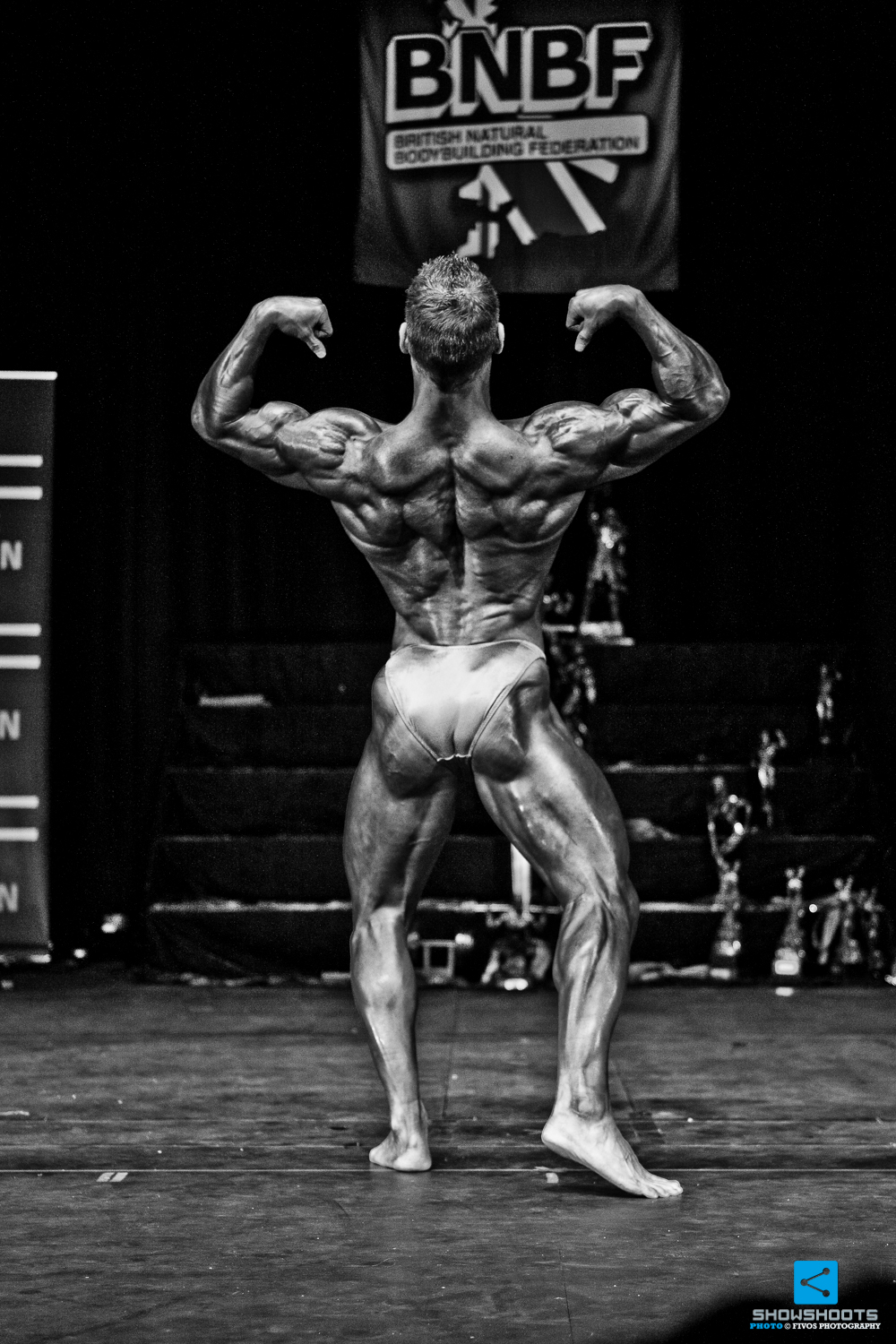 In bodybuilding there’s a saying, shows are won from the back. Competitors can look great from the front, but if’ they’ve not put the time and focus into the back, then they’ll struggle to win the competiton.   The rear double biceps is all about detail and width, this pose shows off the arms, the thickness of the back, and conditioning in the upper and lower body. This pose also shows off the thickness and definition of your back muscles, including your trapezius, infraspinatus, teres major, latissimus dorsi, and erector spinae. Furthermore, the rear double biceps convey glute and hamstrings development and separation, along with rear calf size. When you hit this one, remember don’t tuck in your glutes to show detail in the glutes, this lengthens the back and can make competitors look smaller. 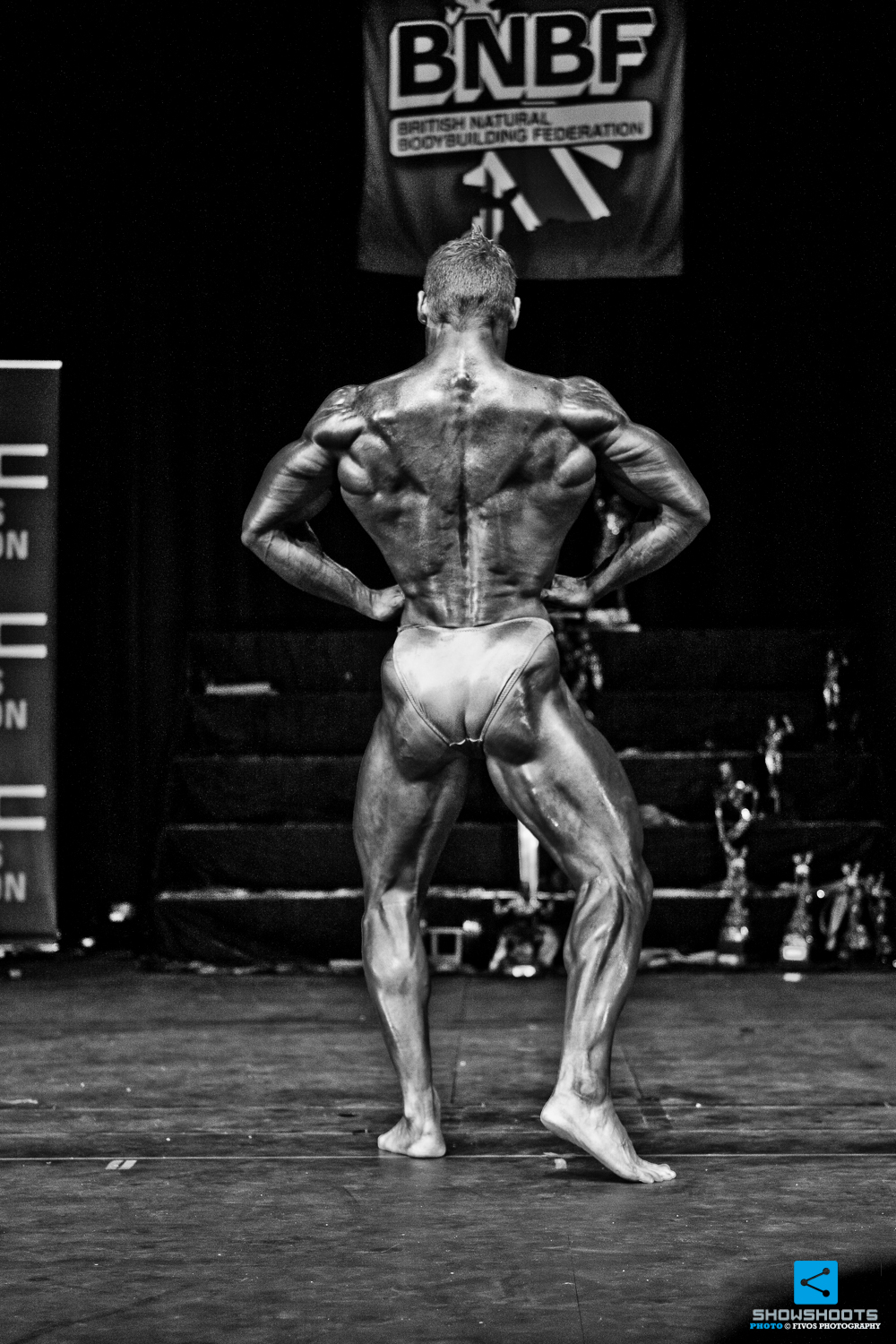 In this shot you spread your wings! The rear lat spread is about back width and just as importantly thickness. Competitors can have great width, but if they haven’t put the time into packing on the size with heavy compounds, sometimes you can see that lack of thickness. This shot also shows the size of your arms from the rear, glute development and definition, hamstrings size and separation, and rear calf musculature. 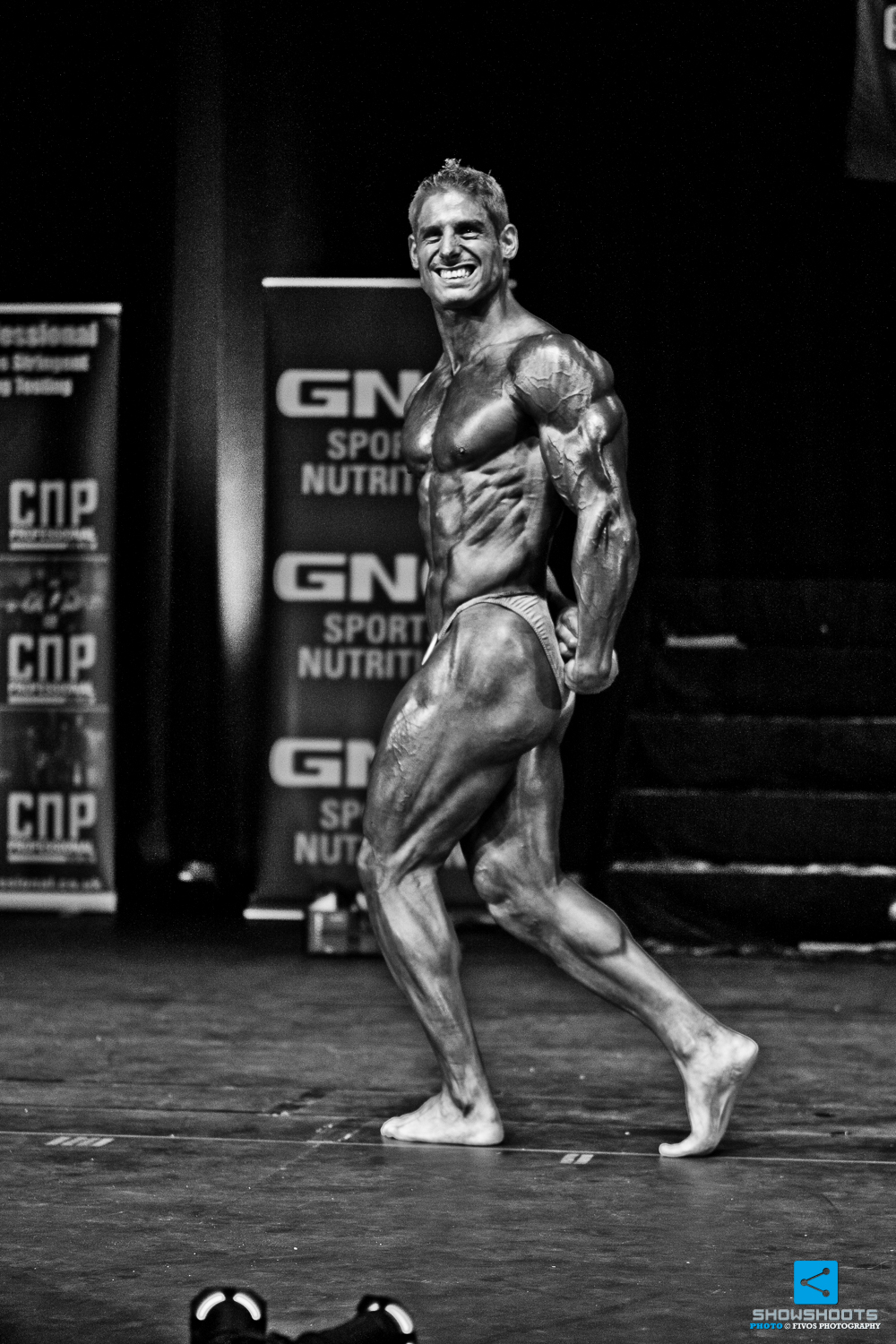 Like the side chest, the side triceps pose displays the side of the body and should be considered in the same light. Unlike the side chest though, in the side triceps the midsection is more on display, so it’s important to have tight abs and diced obliques. No matter which side you choose to hit your pose, you should rotate your body a little toward one side and then the other to allow all the judges to get a good view of your side triceps pose. It also displays shoulder and chest size, side forearm development, thigh separation, and calf development, all again from the side. 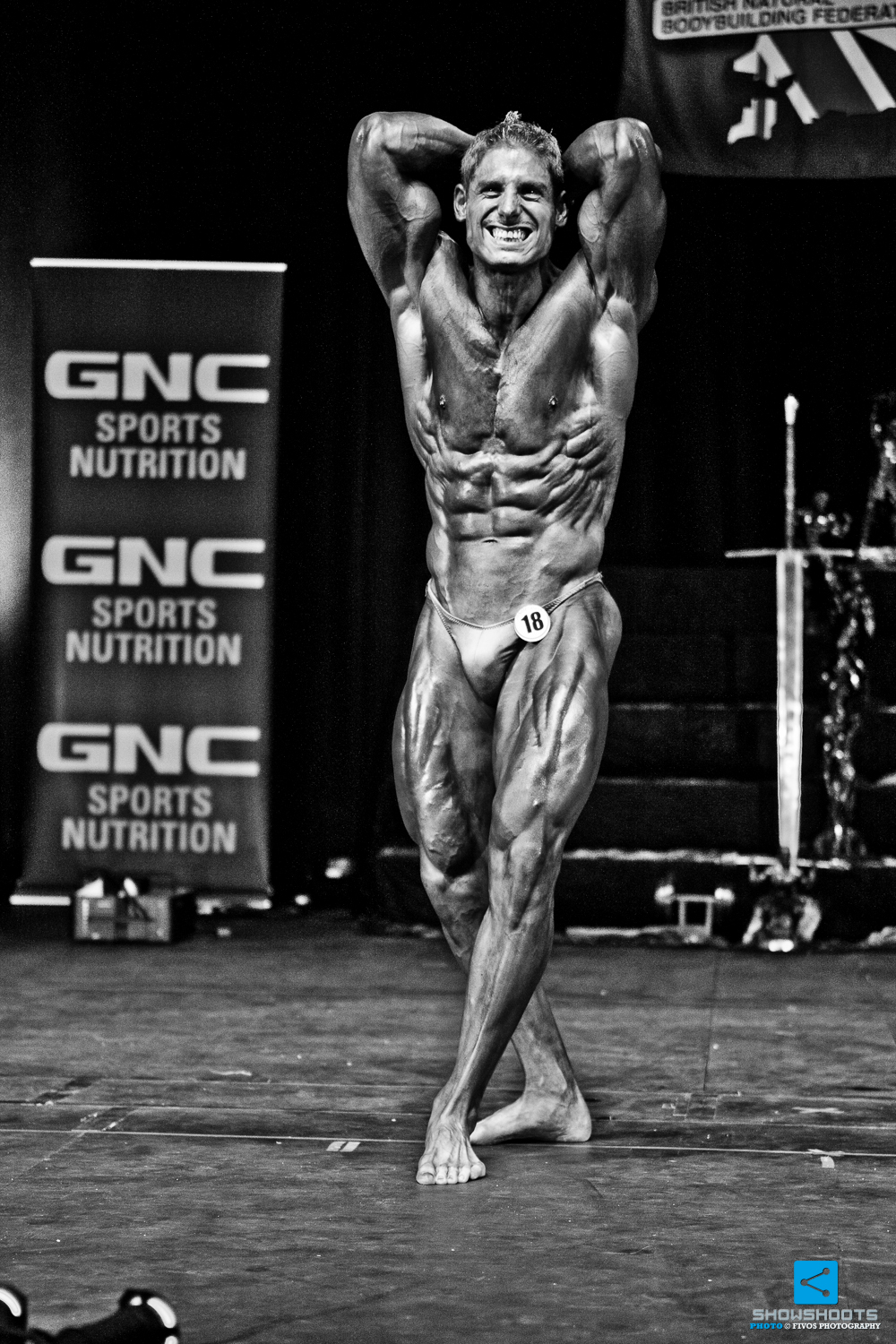 The abdominal and thigh is a pose that conveys the development and definition of your abs, external intercostals, serratus anterior, and quadriceps muscles. It also shows off your chest thickness, front arm and forearm size, lat width from the front, and calf size once again from the front. The abs and thighs is an aesthetic shot and not everyone is going to look great in this pose, particularly if you have a thick midsection, as a result competitors often do several variations of this pose. The old school vacuum is one such variation of this where competitors place both hands over their head and such in their mid-section to create a hollowed out abdominal region. In the other version of this pose, competitors place both or only one hand over their head and then flex their abs from each side, or only a single side, respectively, to better show off their oblique and intercostal musculature and definition. 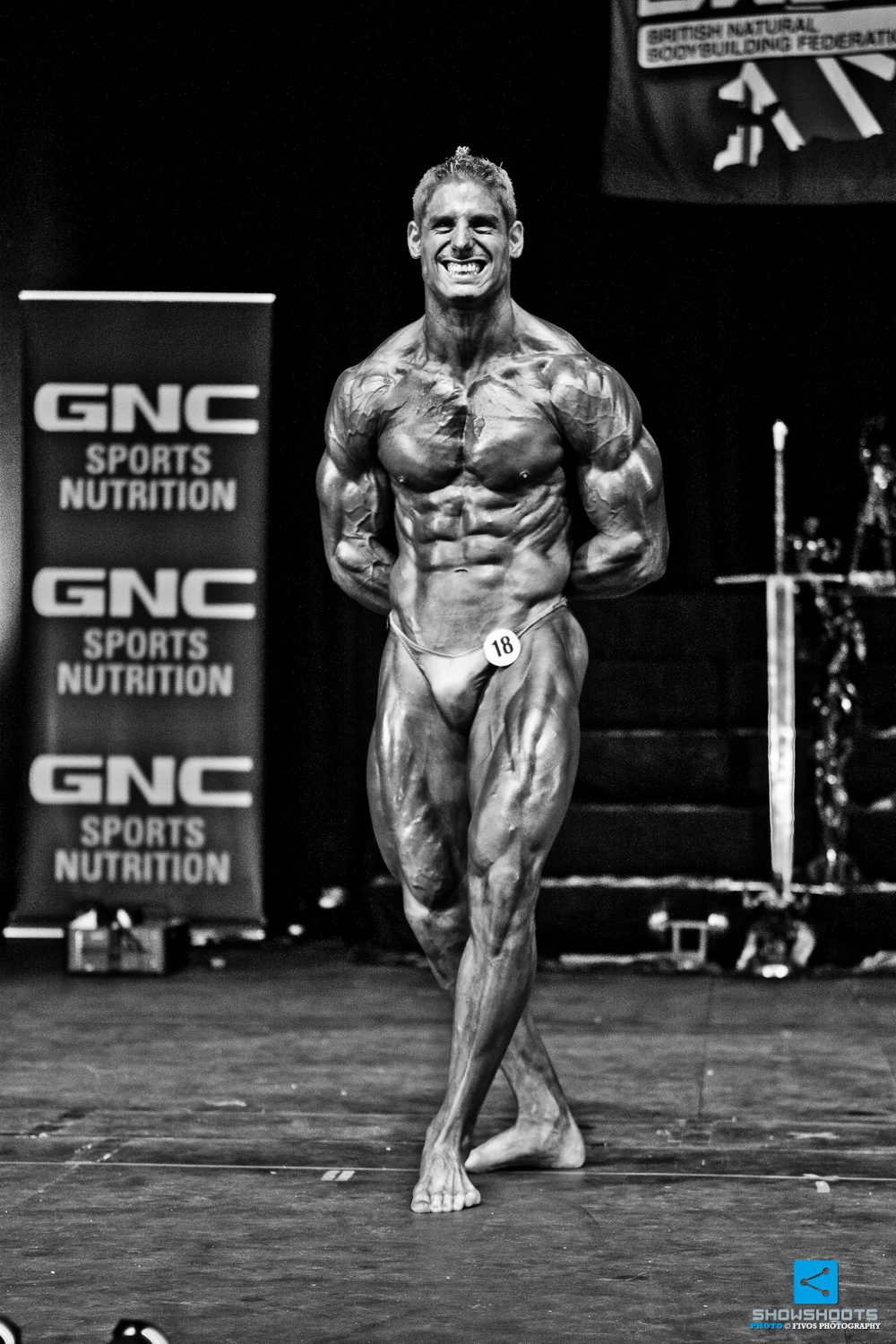 As the name suggests this pose displays all the muscles of the body, flexed to their most extreme. The most muscular is the final of the eight mandatory poses, although some competitions only judge the first 7. There are several ways to do this shot and this pose displays overall muscularity from the front, including the mass and definition of your upper trapezius, shoulders, chest, arms, forearms, abs, quadriceps, and calves. You can do the crab version of the most muscular by bringing your arms and hands together across your abdomen. You can also do a variation by placing one hand by your side and bringing the other arm across your abdomen. It’s really up to you, to decide which pose works best for your physique.

Free Posing and The Posedown: ROUND 3 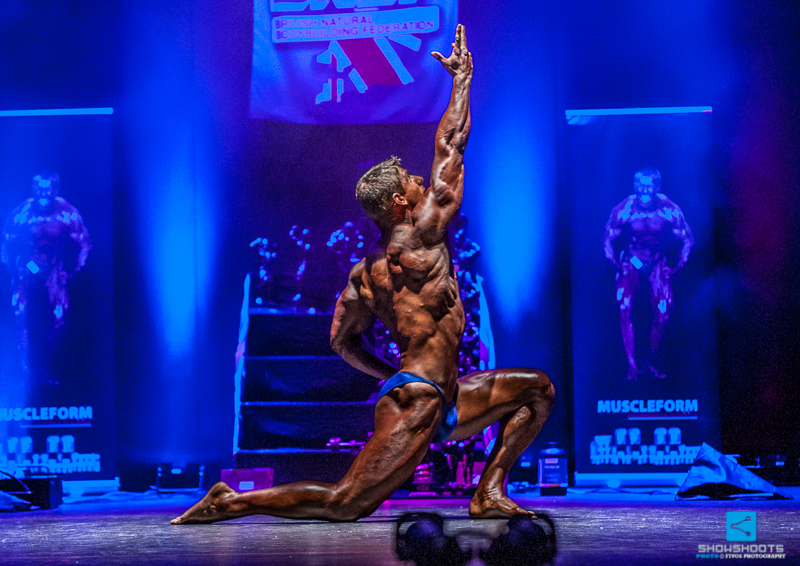 The free posing round usually takes place after the first and second rounds, and if the show is split into a pre-judging session and evening show, then this round will take place at nighttime. Alternatively, sometimes competitors will perform their free posing routine prior to rounds 1 and 2, in this scenario this round isn’t always judged separately on the judges score card.

The goal of this round is to try and catch the judge’s eye and sway any decisions that might be close in their favor. So this is your chance to show your strengths and hide weaknesses. For example, if a competitor is strong in the front and side shots, then more poses from the front than rear make sense. Equally if a competitor has a great top half, but weak legs, then lots of shots on the floor could be the best way to display their physique. When it comes to the routine the aforementioned should be considered, but how the routine is put together and sequenced is really up to the competitor. You’ll usually have 60s to perform a routine, in terms of music, I always recommend choosing something with a lower beats per minute count, with a song that has no swearing, and no screaming metal. Music that has high points and low points work well for sequencing. Remember importantly this is not a best dancer round, and the basics done well can be just as effective as an elaborate routine. If your thinking about how to put together a routine be sure to check out YouTube, there are thousands of examples where you can draw inspiration from. I’ve included some examples of my own routines down below. 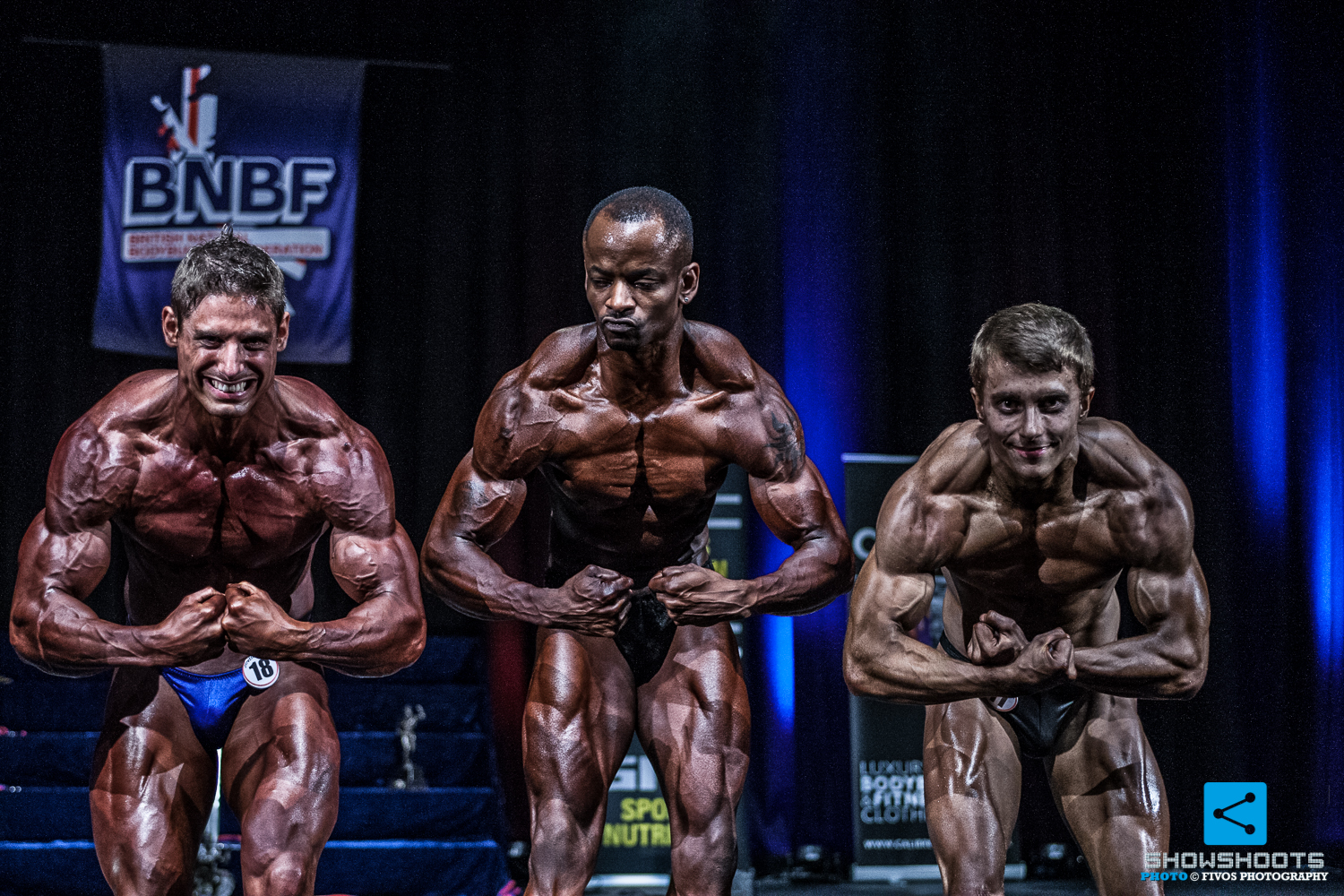 The posedown is the final element of a competition. The house DJ will play music and competitor will have the chance to go head to head against their rival competitors. The judges will be in the process of tallying up scores at this point, so treat this part of the show as an opportunity to gain some final points. Pose your strongest shots and try to highlight competitor weaknesses. For example, if your back is a strong point and you and rival competitor are vying for the same place, be sure to show this off, particularly if your rival is weak in this area, you never know, it could be the difference between winning and losing.

Practice makes perfect, competitions can be won and lost based on a competitor’s ability to display their physique effectively. Be sure to put the time into both perfecting the poses, but also building up your posing endurance. Be sure you can pose for at least 20 minutes straight without a break before you get to the stage. If your unsure about how to pose correctly then be sure to get help from an experience competitor or posing coach. ProPrep Coaching offers both in person and online sessions working with competitors at all levels, be sure to check the link below. Finally, even though it’s a competition, most importantly don’t forget to have fun and whatever the outcome always be a good sport.